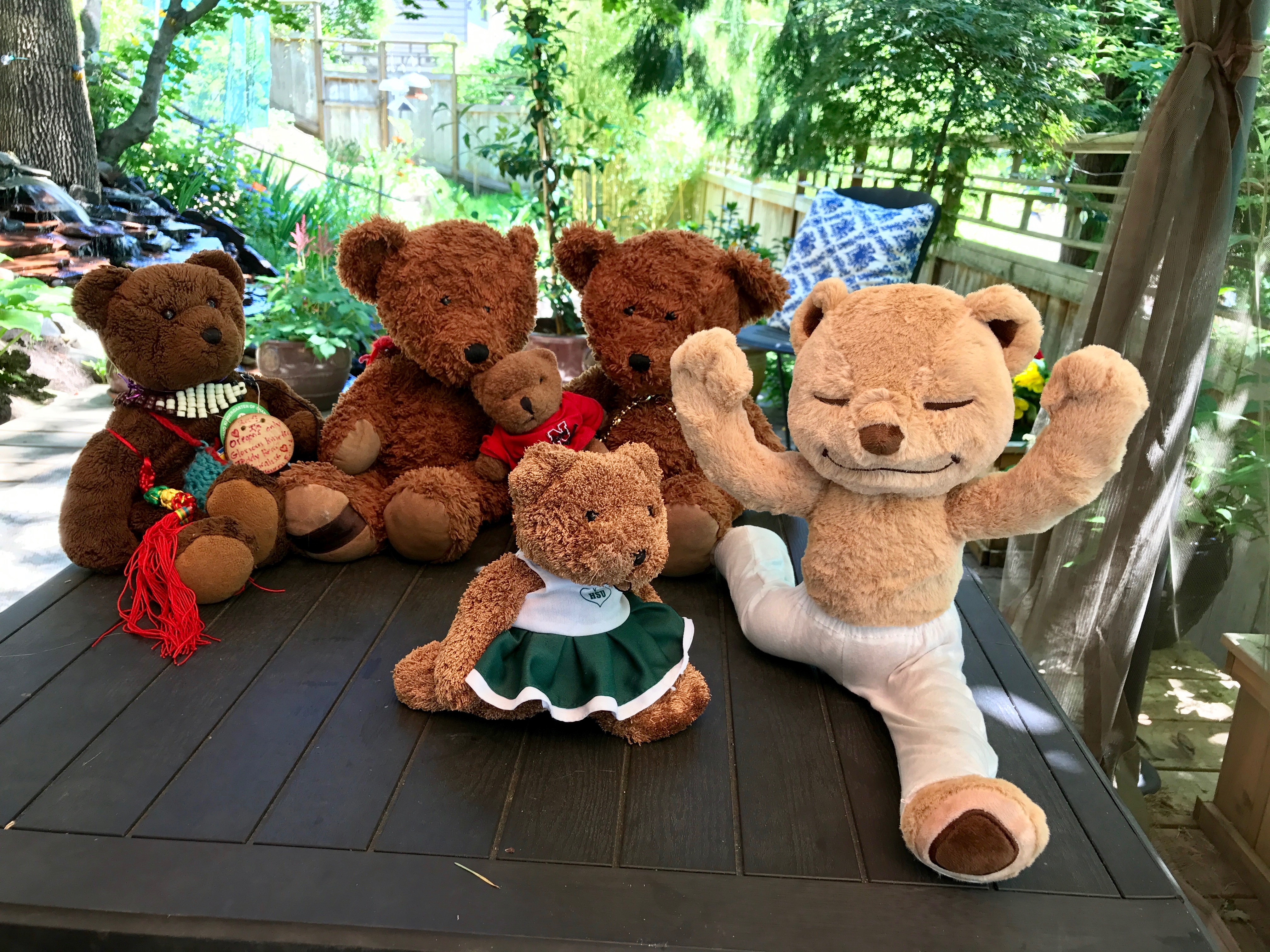 It’s been a long road for Meddy Bear.  His presence was requested by my recent YTT200 graduates.  He has proven to be quite a yoga adept embracing the Yamas and Niyamas most diligently.  He’s already taught me a thing or two about Aparigraha and the importance of maintaining a balanced mind – not getting blinded with the excitement of anticipation or falling into the pits of disappointment when things don’t turn out the way you hoped.   Despite traveling  a most circuitous route from his homeland to Eugene Yoga under the most difficult circumstances that would surely have challenged even Master Houdini, Meddy Bear exited his unbearable travel compartment with a Mona Lisa-like smile.  It seemed a bit touch and go there for a few moments until Bonita Bear gave him a little smooch on the cheek. 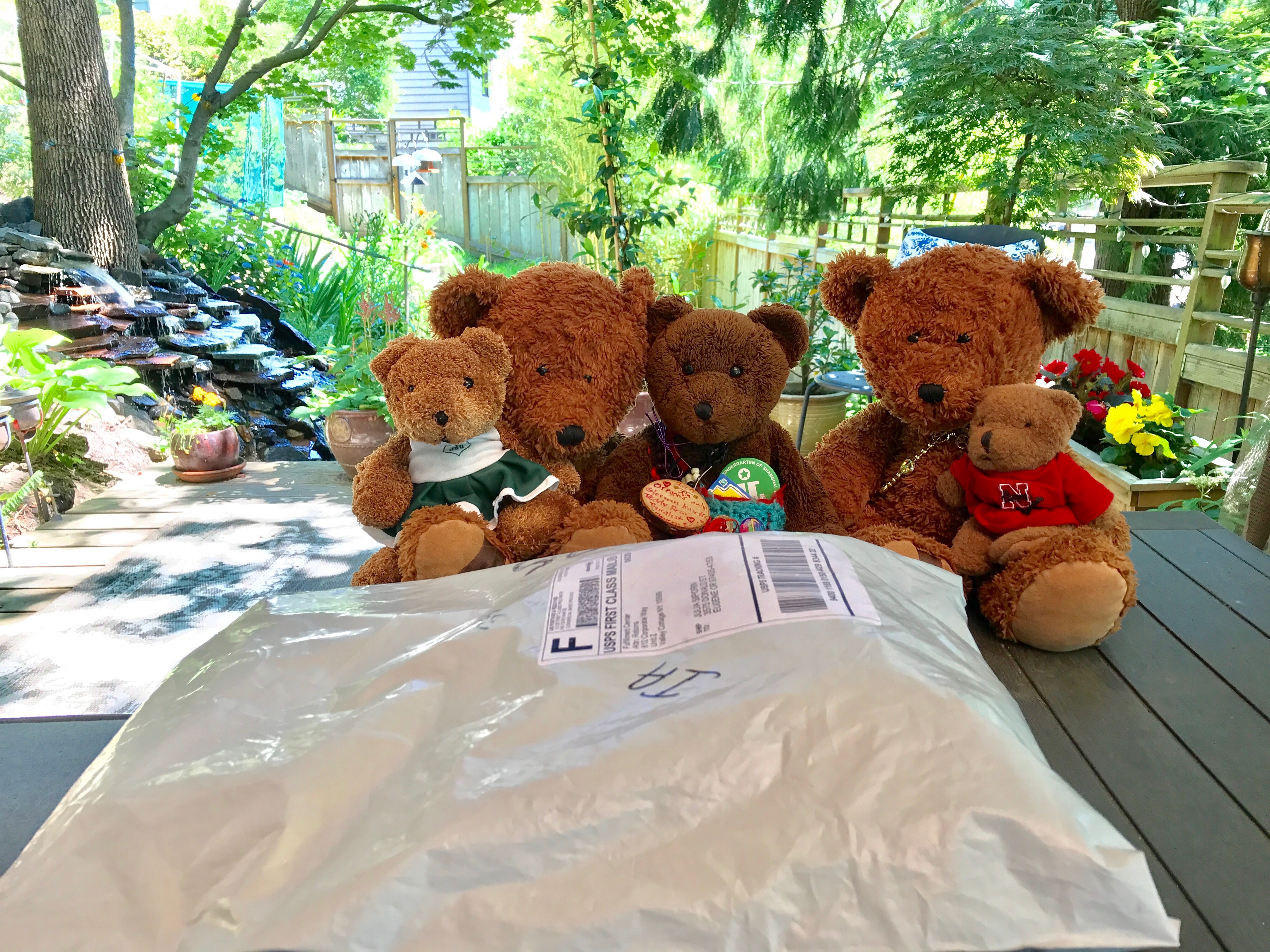 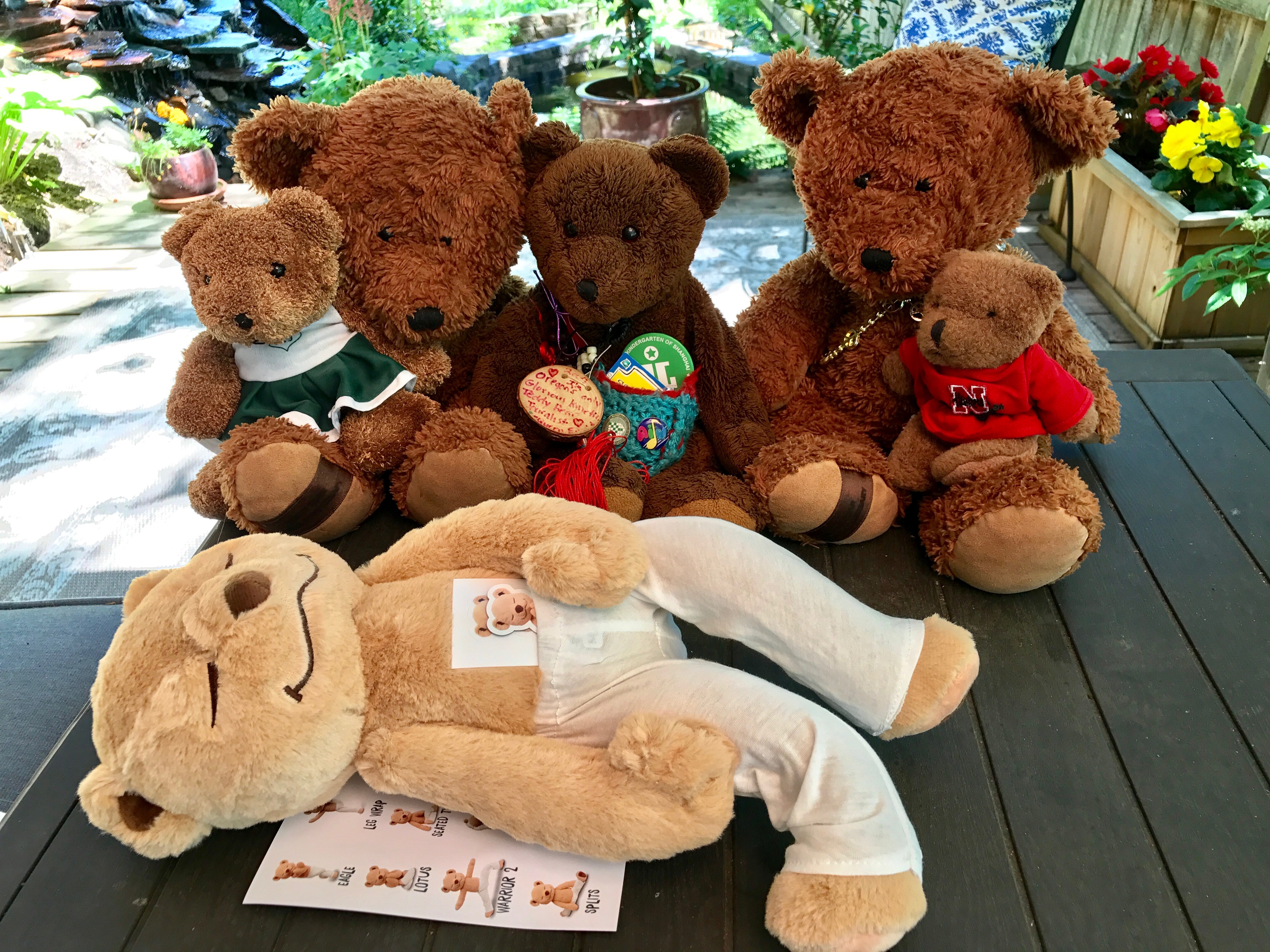 Meddy Bear appears to be in a coma, but he’s smiling… 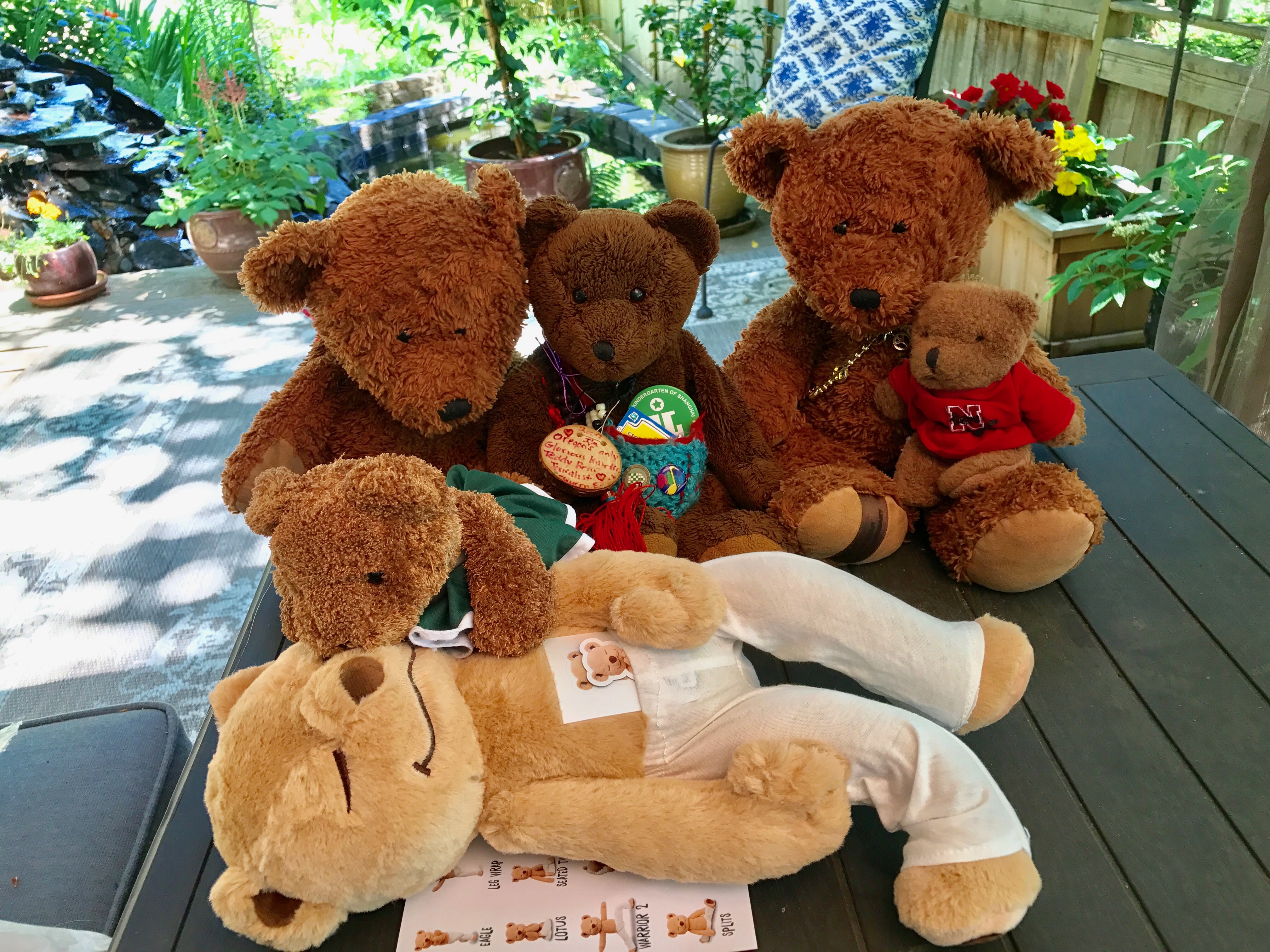 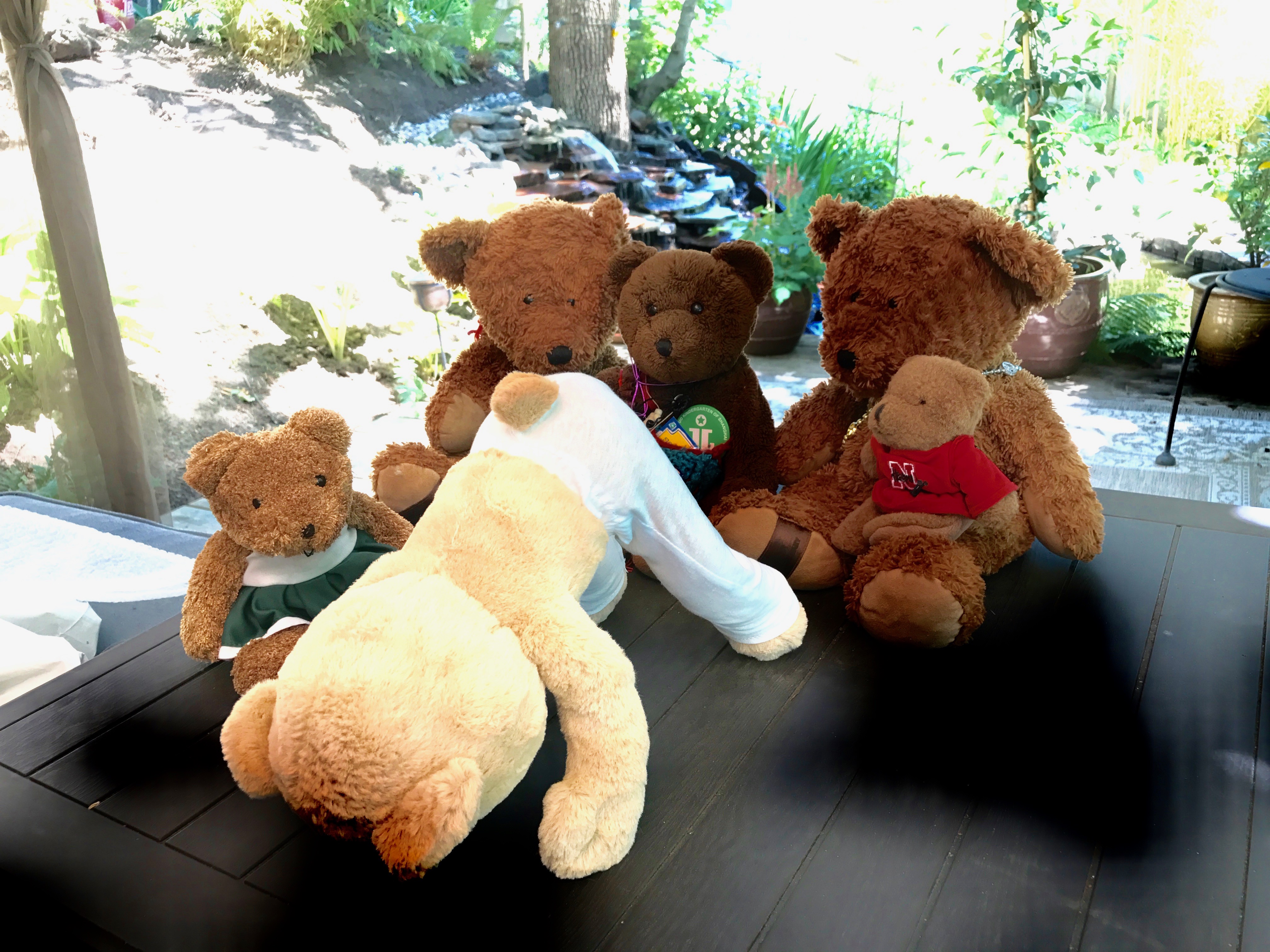 Meddy’s first pose is Down Dog to get the prana flowing again.

“Oooohhh!…” praise from the Peanut Gallery as Meddy actively engages the superficial back line in Three-Legged Dog. 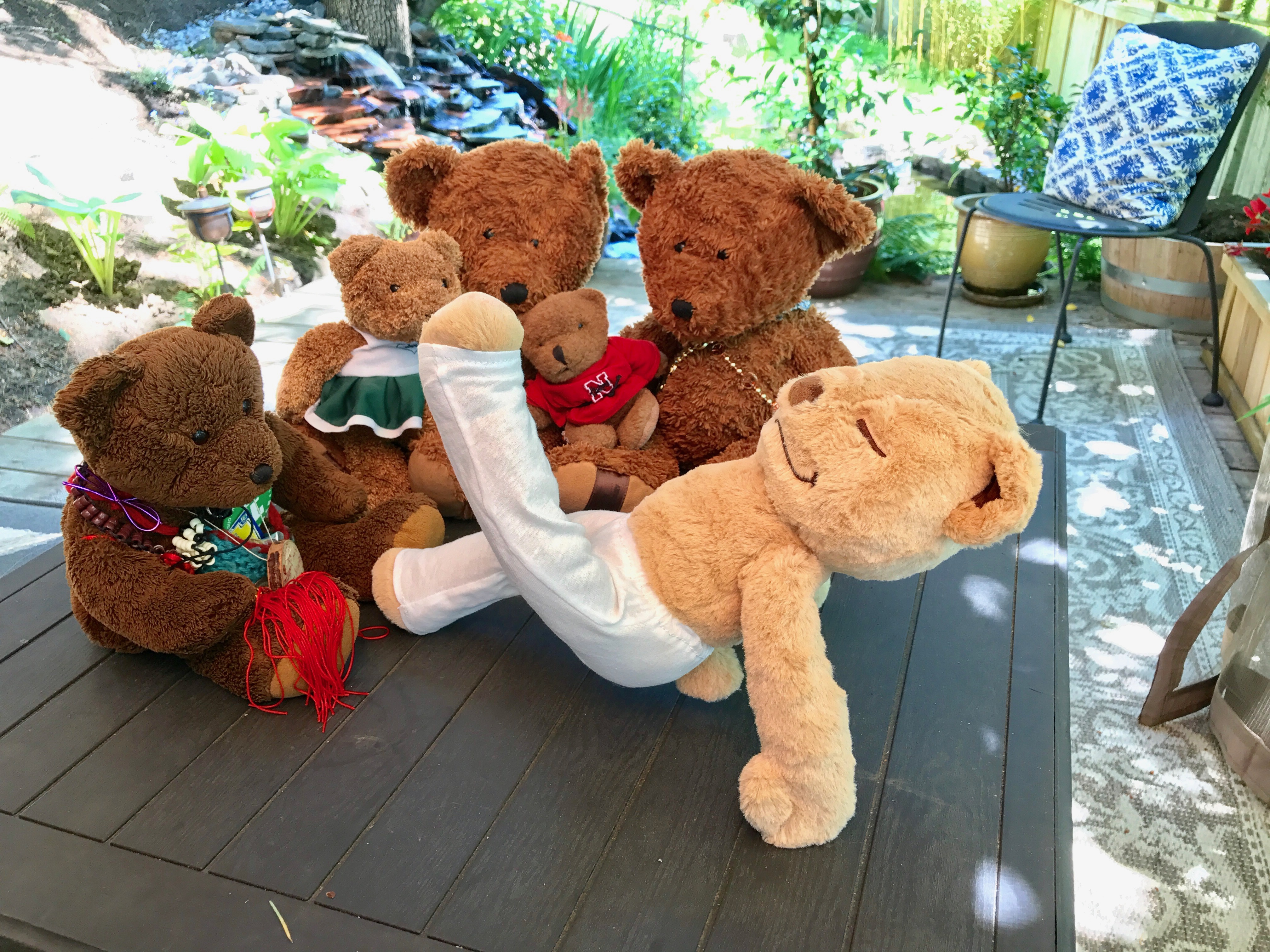 Jefferson Bear in awe notes, “His butt is not touching the ground! Where does this strength come from?” Soda responds, “Chocolate. He must be mainlining some really good chocolate.” 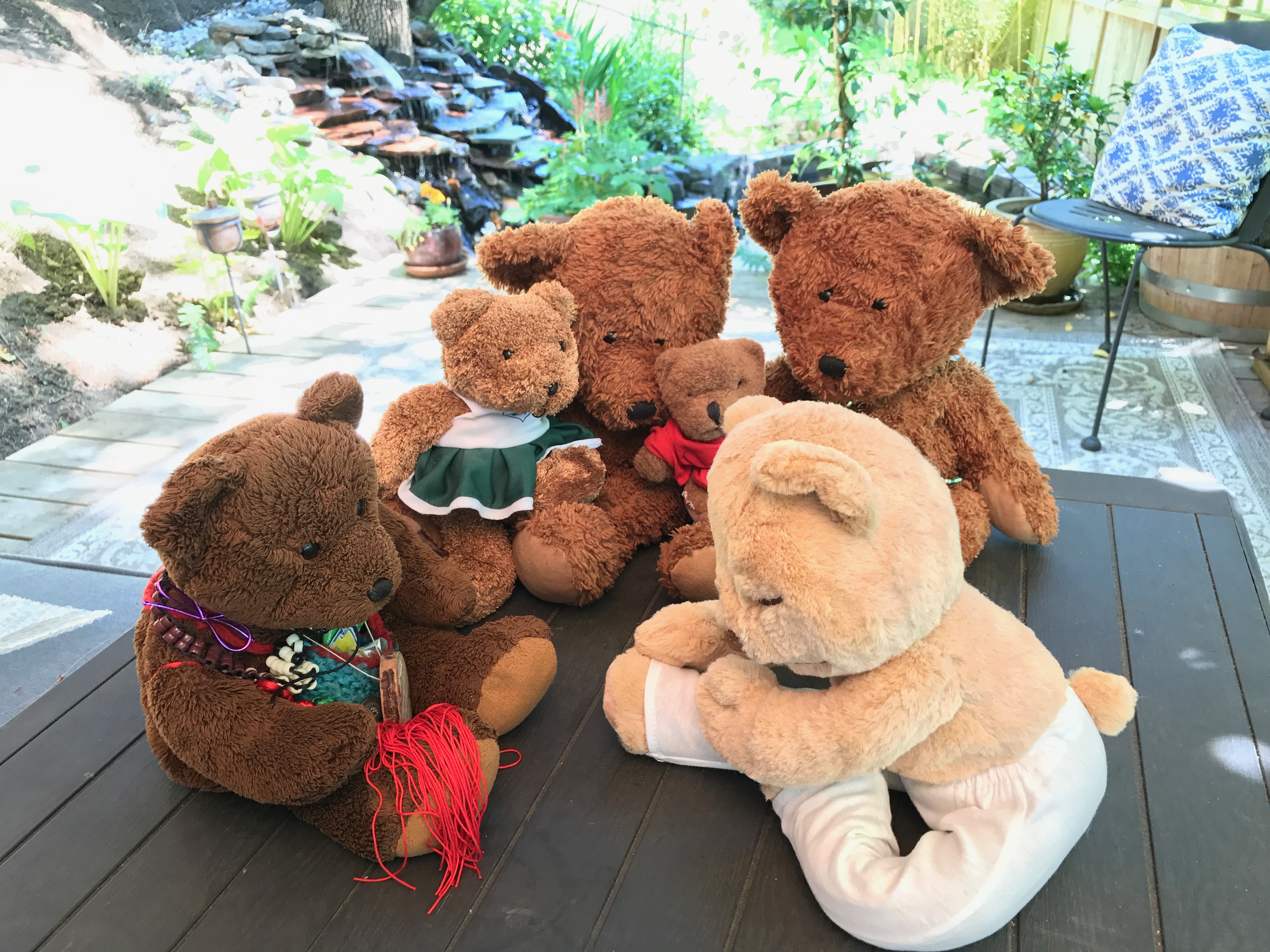 Jefferson is amazed Meddy can keep his left leg bent, “How do you do that, Meddy? When I bend my leg like that, it just extends again.”

Bonita the Cheerleader Bear showed Meddy Splits…Jefferson is like, “Whoa… how do you raise your arms like that? Not even Bonita can do such a feat!”

I found it interesting to note what amazes teddy bears about yoga poses.  For me, what’s notable about the splits is what the legs can do in the hip joints (not that that’s such a good thing); for Jefferson bear, what was amazing was the fact that Meddy could hold up his arms (Urdhva Hastasana),  or how in Janu Sirsasana  Meddy could bend his knee into his thigh and maintain that position… something I wouldn’t give a second thought about. Hmmm….

This will be interesting around here for awhile.  Meddy has such equanimity and joy that flows from somewhere deep inside.  It appears he has been learning how patience, visualization, inner awareness, and cultivating one’s inner resources can evolve a simple teddy bear.

My bears are in awe while just glad to have a new friend.  I’m going to keep an eye on Jefferson as I think he has an idea that he too should be able to raise his arms overhead and keep them there.  Oh-oh.

Sorry, the comment form is closed at this time.